In the photo (left) Dmytro Denysenko, founder of the company for the construction of domestic and industrial rooftop solar power plants “Teplodom.net.ua” together with colleagues and students of the Kharkiv Professional Lyceum of Construction Technologies.

The main activity of the Kharkiv company “Teplodom.net.ua”, founded in 2002 by Dmytro Denysenko, is aimed at the construction of solar power plants. The company promotes the ideas of “green” energy and the introduction of energy-saving technologies in our country.

In June 2021, Dmytro completed the implementation of a charitable project for the construction of a rooftop solar power plant for the orphanage №3 in Kharkiv, where children under 3 years of age live and are treated. The main idea of ​​the project Dmytro says: “Make a charitable contribution to the orphanage, understanding the benefits of using new clean energy-saving technologies that can help save the orphanage by using its own electricity. The administration can now spend the money saved to solve other important problems of the orphanage. ”

“Thanks to my publication, I was supported by partner companies in the field of solar energy and other individuals who have expressed a desire to participate in a charity project for orphanage №3, located in the Kharkiv region,” – says Dmitry. So the project was launched in September 2020.

Companies that joined a charity project donated money or provided modern energy-saving equipment: photovoltaic modules, inverter equipment, and fastening systems. Among the partners who took part in Dmytro’s project: the international group of companies “Atmosfera – Nature Technologies”, the manufacturer of equipment for alternative energy in Ukraine, the company “ALTEK”, the Ukrainian engineering company that develops and manufactures fastening systems for solar panels “Spline Systems” and Ukrainian manufacturer of fastening systems for solar stations the company “Kripter”. With a gesture of goodwill, funds were quickly raised to purchase the necessary equipment and the construction of a solar power plant began.

The owner of Teplodom.net.ua emphasized: “… I have decided to involve active young people in the process of building a solar power plant. Thus, my idea is also aimed at attracting active students, increasing their knowledge in the field of energy efficiency and energy conservation. With these skills, students will be able to join our professional community in the future and build solar home power plants. ”

Thus, on June 23, students of Kharkiv Lyceum of Construction Technologies together with teachers Oleksandr Pikalov and Olga Mukhanova attended a field master class, where they participated in the installation of a real solar station together with representatives of Teplodom.net.ua Dmytro Denysenko and Tereshchenko Artem. Students and teachers gained invaluable experience working in real conditions with modern equipment.

In general, the following types of work were performed:

Such a project again demonstrates the social responsibility of business in the field of solar energy and has a positive impact on the development of charitable culture in Ukraine. In addition, Dmitry is not the first to organize social projects, such activities are part of the mission of his company. For example, in 2020 he held a regional competition of children’s drawings dedicated to the promotion of solar power plants with a prize fund. 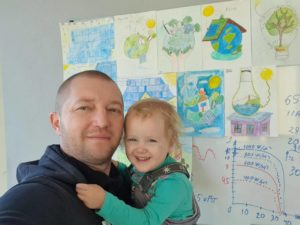 In the photo Dmytro Denysenko together with his daughter Anastasiia against the background of children’s drawings sent by the contestants.

Dmytro showed by his example that the companies of the solar industry can inspire others to join the charity and do good things together!