We wanted to investigate how Germany managed to reach 49 GW of solar power plants built (as of January 1, 2020). Andriy Gerus, Chairman of the Verkhovna Rada Committee on Energy and Housing and Communal Services, helped us with this. He recently drew attention to the successful results of applying the “feed-in” tariff in Germany and compared it with the “feed-in” tariff for SPP in Ukraine (https://www.facebook.com/andriy.gerus/posts/10221176671020051).
Here is a deeper picture of the processes in Germany and Ukraine, which have already been mentioned by Andriy Mykhailovych. 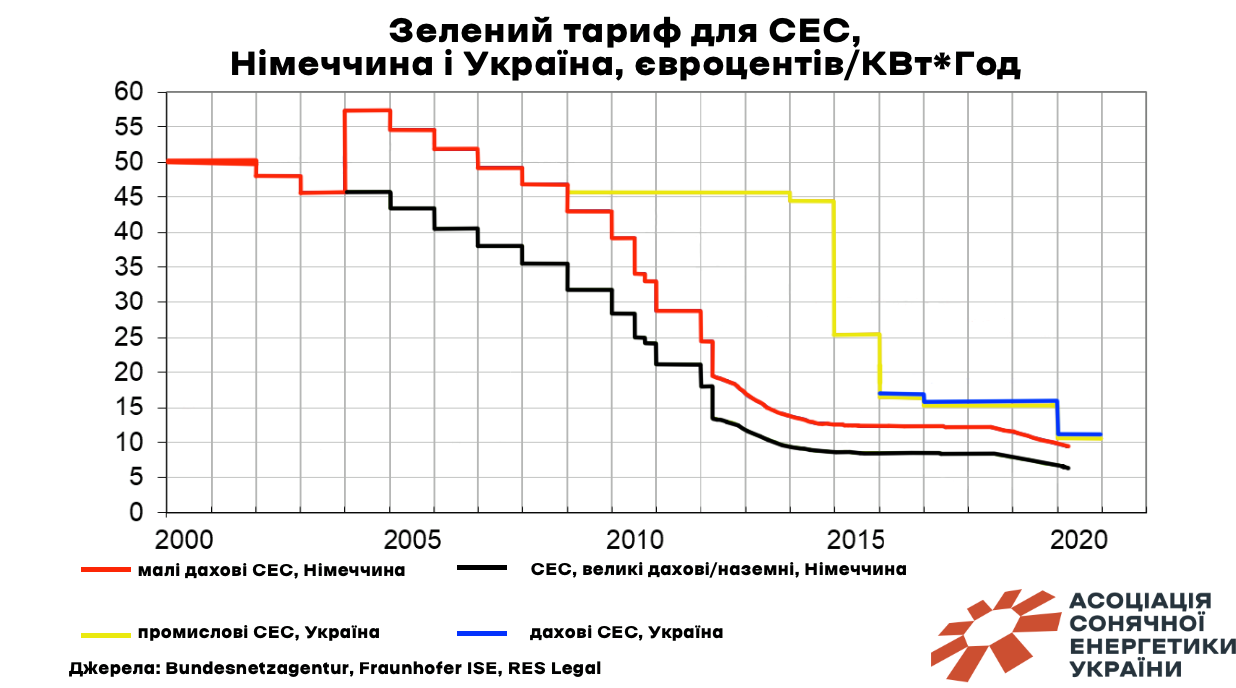 Germany. In March 2011, two weeks after the accident at the Fukushima nuclear power plant (Japan), the German Government decided to decommission more than half (8 of 17) of the operating nuclear reactors, i.e. absolutely all reactors that have been in operation for more than 30 years, as well as planned for 11 years, until 2022, to close the remaining existing nuclear reactors in Germany finally. It is for these reasons that we see an immediate increase in the installed capacity of SPP in Germany: in 2011 an additional 7.9 GW of SPP was built, in 2012 – plus 8.1 GW of solar power plants.
The average size of the “feed-in” tariff as of today, which is paid in Germany is 0.25 Euros, and in 2004 even reached 0.57 Euros for roof SPP and 0.47 Euros for ground. At the same time, the size of the “feed-in” tariff for new stations built in 2020 in Germany ranges from 6.95 eurocents for industrial to 9.87 eurocents for roof SES, and newly built stations receive guaranteed support for the “green” tariff for 20 years, that is, until 2040.
From the chart below we can also see that in Germany the “feed-in” tariff for SPP from 2015 to 2020 decreased very slowly and only by three eurocents in 5 years. It is also worth noting that today only 14% of the installed capacity of SPP are hhSPP. 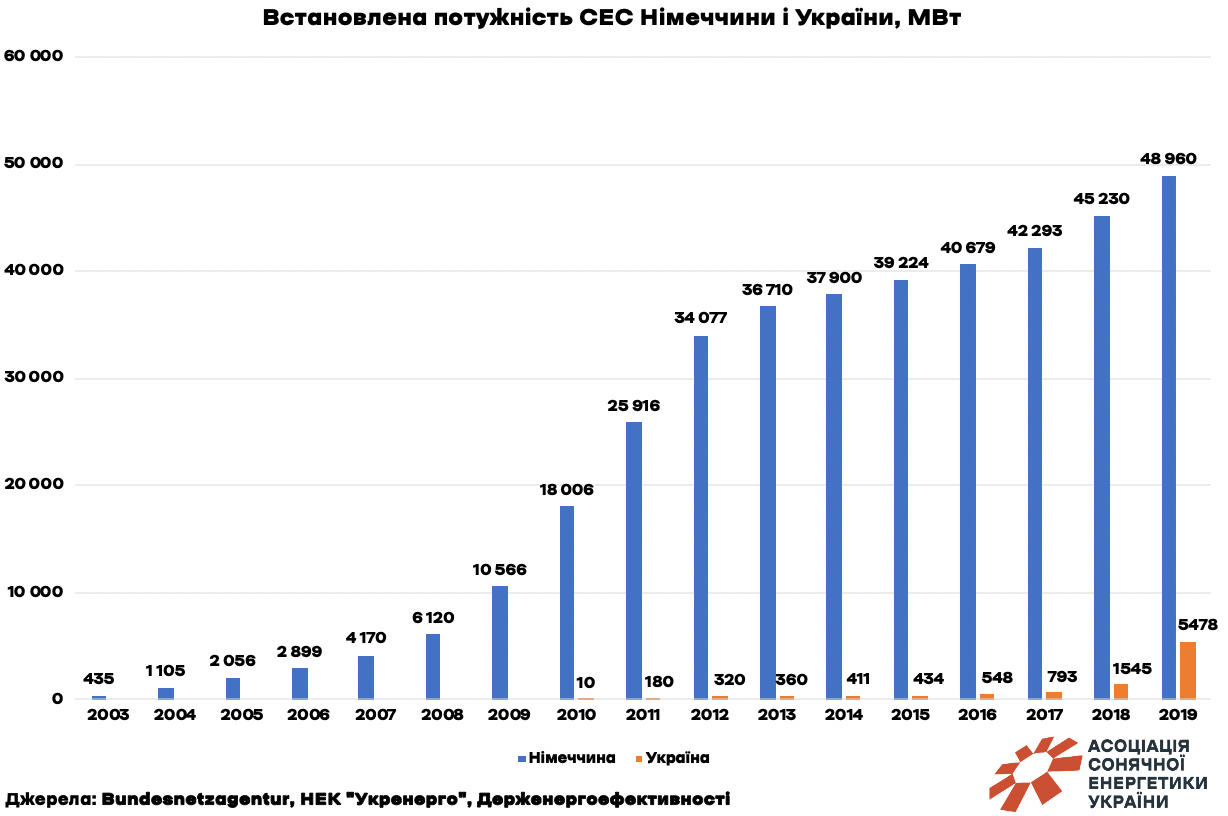 Ukraine. Economically and legally favourable conditions for the intensive development of renewable energy due to the application of the world’s successful model of “feed-in” tariff coincided with a significant reduction in price in 2018 of technologies and equipment for solar energy. From our point of view, it is this fact and direct legislative guarantees of return on investment that have partially offset the political and financial and banking risks that still depress Ukraine’s economy, given the hybrid war and energy dependence. Thus, in 2018, an additional 0.7 GW was built in Ukraine, and in 2019 – another 3.5 GW of industrial solar power plants.
State guarantees and the boom in solar energy in the world have contributed to a record attraction of more than 150 billion hryvnias in investments in Ukrainian RES energy, mostly in the solar industry. The RES sector has become the only energy sector to build new generating capacity in the last 16 years. The installed capacity of all SPP in Ukraine reached about 5.4 GW (as of 01.01.2020), so, in fact, thanks to the new solar stations in Ukraine and managed to achieve the target 11% of electricity from RES by 2020, which is determined by international obligations our country.
The average size of the “feed-in” tariff in Ukraine is 0.16 Euros, which is 36% less than the average size of the “green” tariff in Germany. It should be noted that the size of the “feed-in” tariff in Ukraine in 2020 has decreased by 25% and ranges from 11.26 eurocents for industrial SPP to 12.28 eurocents for roof SPP, i.e. it is higher than in Germany by only 2.5 up to 4 eurocents (see the chart for details) and is valid until the end of 2029, and not until 2040, as in Germany. Given the high cost of capital in Ukraine and excessive connection fees, the payback period of new small SES in 2020 has become commensurate with the payback period of the same SPP in Germany, without taking into account the chronic debt of the state to RES producers in Ukraine at 95% per month (as for April-May-June 2020), which at once eliminates all the advantages of investing in clean energy in Ukraine.
The changes proposed by the Government to support solar energy, which was approved by MPs in the first reading, mean that Ukraine is moving in the opposite direction from Germany. In particular, due to the postponement of the introduction of auctions, the curtailment of support for the construction of new PV, or unilateral retrospective deterioration of conditions for investors of existing PV.
Finally, we agree with the arguments emphasized by the Chairman of the Committee, Andriy Gerus: “Over the last 10 years, there has been a real breakthrough in solar generation technologies. The cost of a solar module has dropped from 2.33 to 0.27 dollars per watt in nine years, which means that the panels have become almost 9 times cheaper. The power factor of the solar module has also improved from 15 to 18%”, which makes solar energy in 2019 the leader in the growth of new energy capacity in the world and the most dynamic RES industry due to efficiency, simplicity and low cost of technology. In Germany, they understand this, but do they listen to common sense in Ukraine?