Iryna Skazko, deputy director of the Association of Solar Energy of Ukraine.

Publication in the online edition of Energoreforma.

According to the pace of development of green energy in 2019, Ukraine was in the TOP-10 countries of the world, as well as in the first five countries of Europe in terms of added new solar energy capacities.

Before the full-scale war of 2022, the total capacity of RES facilities in Ukraine reached almost 9,600 MW, and the potential for further development was impressive. It would seem that Ukraine is finally on the threshold of energy transition and reducing dependence on imported fossil fuels: gas, oil and coal.

Despite this, even before the war, the solar energy industry experienced serious systemic problems. These are debts for electricity produced in previous years, distortions in the settlement of imbalances, in some places daily restrictions on renewable energy producers, and violations of other terms of contracts with producers of green energy.

But, even despite revisions to the green tariff, the crisis of non-payments, economic instability, clean energy still attracted investors, although much less than it could have. In general, more than 11 billion euros of foreign and Ukrainian private investments have been invested in the field of green energy. And as we know, the investment image of the state is equal to the stability of legislation and its compliance with international law, the principles of the Constitution and compliance with the laws of Ukraine. 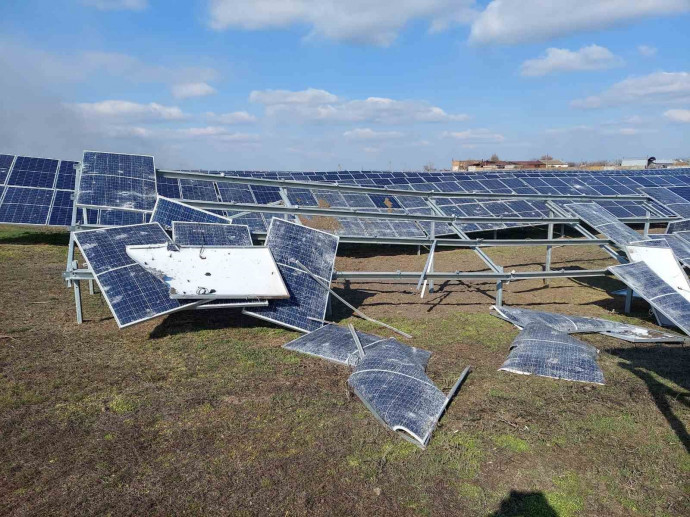 The war makes adjustments to the country’s energy security and exacerbates the challenges that existed before.

For almost ten years now, experts have been warning that 90% of power units at thermal power plants are in a critical condition that is only getting worse. The situation is the same with nuclear power plants, which were mainly launched more than 40 years ago and have long exceeded their planned “norm” of operation. For 18 years, not a single new energy generating capacity was built by the state.

In general, the energy system of Ukraine is not flexible and does not meet modern requirements and realities. But today, after the military occupation and mining of the Zaporizhia NPP, even ardent supporters of nuclear power plants in the world and Ukraine are gradually beginning to change their views, because the consequences can be much worse than those caused by the Chornobyl tragedy. They will be felt not only in Ukraine but also far beyond its borders.

Nuclear terrorism, which is happening right now and is intensifying every day, the threat of destruction of the supply chains of nuclear fuel, coal and gas delivery, and energy dependence on Russia – these all challenges that must be responded to immediately.

It is also worth reminding that the RES industry continues to suffer from the consequences of a full-scale war, just like other enterprises of the energy complex. Solar energy is no exception. Indeed, today it is difficult to accurately assess the extent of the damage.

But according to the Ministry of Energy, almost 30% of RES capacities are currently not generating electricity, and most of them are damaged.

According to preliminary estimates, almost 600 MW of solar power plants were damaged, and a large part did not supply energy to the grid at all. Domestic SESs were also injured, but their number is difficult to estimate.

With the beginning of a full-scale war, the RES industry supported the Ministry of Energy’s activities to stabilize the market situation and maintain the power system in working condition, as well as helped the state and local communities that were under occupation or destruction in every possible way. Despite the extremely difficult conditions, all the commands of dispatchers of transmission and distribution system operators were carried out, and everyone was sympathetic to the temporary changes in terms of payment for released clean electricity in March and April of the current year.

Currently, the situation in the electricity market has relatively stabilized, the commercial export of electricity to the EU has begun, and therefore we expect the restoration of the rights of RES producers.

At the same time, what we are seeing now on the part of the state is an attempt by deliberate actions to bankrupt Ukrainian green energy companies that have energy solutions to overcome the above-mentioned problems with Ukraine’s energy independence and its energy sovereignty.

For example, we can mention the order of the Ministry of Energy of Ukraine dated March 28, 2022, No. 140 regarding payments for renewable energy generation. At that time, payments to SES were limited to 15% of the weighted average green tariff for 2021, and the rest of the funds for the sold green electricity were directed to the repayment of debts to Energoatom for 2020-2021.

We, representatives of the industry, understand the scale of difficulties that our country is currently facing in the field of energy, and we support state institutions as much as possible, but all decisions of state bodies must be based exclusively on the law.

Similar provisions are contained in the subsequently issued order of the Ministry of Energy of Ukraine No. 206 of June 15, 2022 “On Settlements with Producers under the green Tariff”, which entered into force on July 5, 2022.

According to it, the order of distribution of funds for producers of electricity from alternative sources for the period of martial law was established. Thus, for manufacturers producing electricity from solar energy, payment for the released electricity was provided in the amount of 18% of the weighted average size of the green tariff for 2021.

If there is a balance of funds on the current account of the “Guaranteed Buyer”, it was possible to distribute the balance in favor of manufacturers in proportion to the number of charges for the respective manufacturer.

Is it similar to the statutory support of the industry by the state? The question is rhetorical since the calculations at the current level do not even cover operating costs for more than 90% of solar energy producers, not to mention the repayment of loans to Ukrainian and international banks.

The bankruptcy of RES producers will certainly lead to the collapse of the entire banking system of Ukraine since more than half of the power plants were built with borrowed funds.

Therefore, it is extremely important not to allow the laws and the Constitution of Ukraine to be neglected in the conditions of war, which means not to repeat the Russian model of the destruction of the rule of law. And this should be our general priority today and in the future.

According to the estimates of the Association’s members, even in wartime, with the correct organization of the business activities of SE “Guaranteed Buyer”, the enterprise can ensure payments for the produced electricity at the level of at least 50-60% of the weighted average green tariff.

Market participants are ready for fair dialogue and communications with state authorities.

It is also worth noting that at the legislative level, equal conditions are provided for all market players.

Accordingly, limiting payments to only green energy producers is nothing but discrimination. The war continues, but everyone is equally affected, it is not possible to redistribute income from some participants and make others unprofitable.

The situation when the funds received from the sale of green generation are distributed to the benefit of Energoatom NAEC or other participants in the electric energy market is unacceptable. Such actions can only cause even greater imbalances in the electricity market and its collapse.

Today, the support and development of green energy are important components of our energy security and independence.

This reduces the costs of importing energy resources, the depletion of own energy reserves, and stabilizes the security of energy supplies.

Preservation and stability of the operation of the electric energy market, including the principles of operation of RES producers, corresponds to the interests of the state’s energy security.

It is necessary to work in a coordinated way for all industry representatives so that the enemy does not use the resulting instability to his advantage.

It is important to refrain from any drastic legislative and regulatory initiatives aimed at changing the existing model of the electricity market. We must fight the enemy, not our own.

Representatives of the industry are ready for dialogue, for decisions that will not violate the current legislation and the principles of civil society involvement in decision-making.

The resolution of the crisis in the electricity market depends significantly on the position of the Ministry of Energy and the National Energy Regulatory Commission, as well as the specialized Committee of the Verkhovna Rada. Any decisions concerning producers of green energy must be made exclusively with the participation of producers.

Renewable energy is the industry that should become the center of the recovery of the state’s economy and the creation of new modern energy industry in Ukraine. And the sooner this is realized, the sooner Ukraine will receive the much-needed resources for recovery.